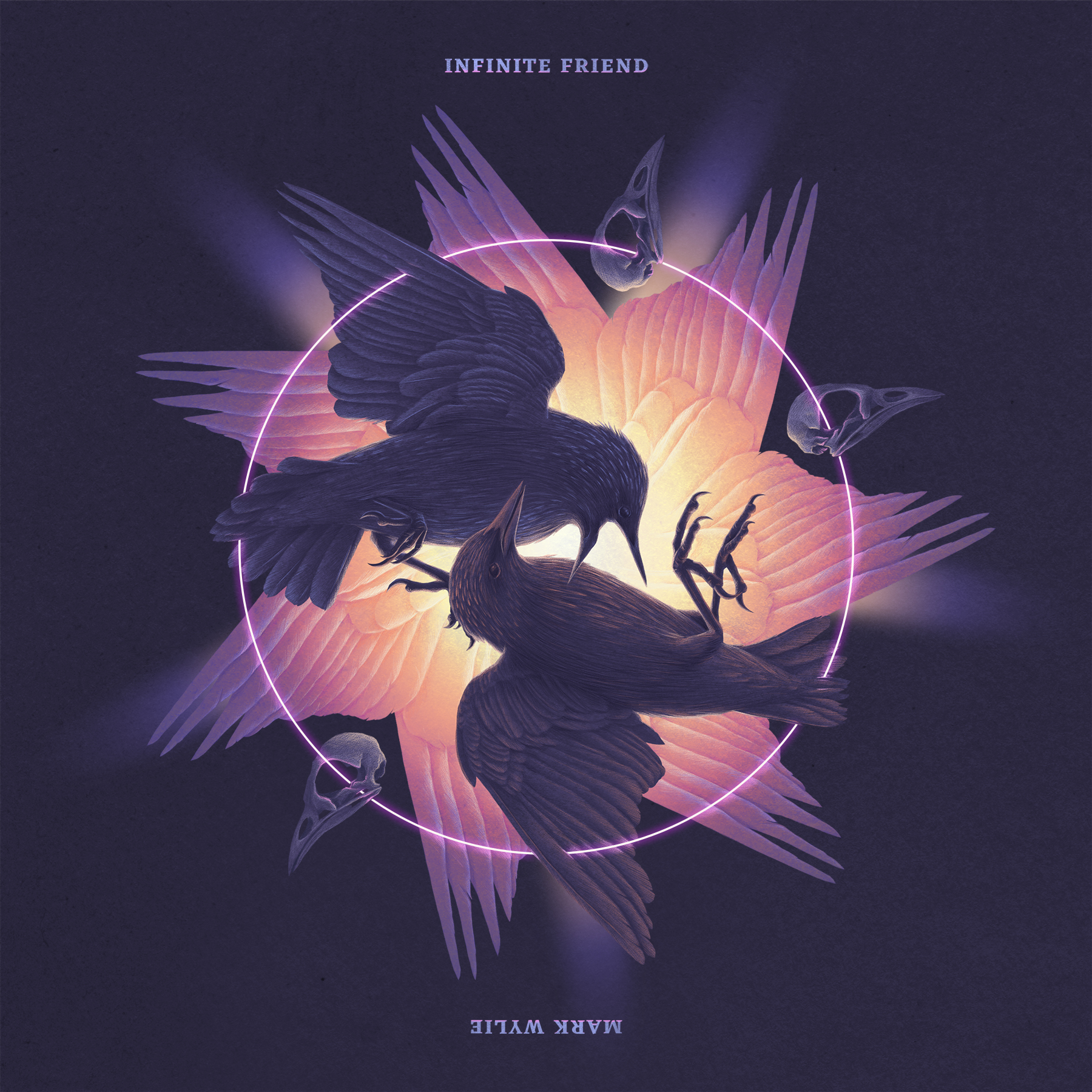 Infinite Friend is a concept record exploring life, death, afterlife and rebirth. The album was composed devotionally for God & Guru, inspired deeply by Yoga philosophy and by the writings of Paramahansa Yogananda. The Music explores the turbulent sufferings of the human experience and the tranquil serenity of our inherent divinity, offering listeners a bridge between physical and astral worlds. The record seeks a balance between catapulting listeners into the abyss and rescuing them on a magic carpet of bliss.

Embark on a journey through celestial ripples, riding the tides of emanating echoes. Rays of luminous vibrations conducted by the acoustic guitar act as a beacon for the tandem forces. Primordial, yet ethereal, the grounding elements of drums harken to our tribal instinct while the currents of sound synthesis wash over us alluding to traces of the astral spheres. A distilled sense of spiritual yearning paves way for these healing sounds, a convalescence for the soul.

In celebration of the Summer Solstice, Mark returns with a pair of singles from his archives. Pillars of Mark’s sound signature remain true; Zen-like guitar passages, ceremonial orchestral layers, lucid ambient soundscapes and the sound of spirit drums.

Moonlight and Hide & Seek were composed respectively during Full Moon cycles. A scribe for the Cosmic Vibrations, Mark cannot take all the credit for the sounds you hear. A process achieved by entering a trance-like state of one-pointed awareness, becoming equal part passenger, equal part composer. Each song features words of wisdom from Alan Watts, mantras for the Spirit seekers and embers of truth to spark the fires of realization. 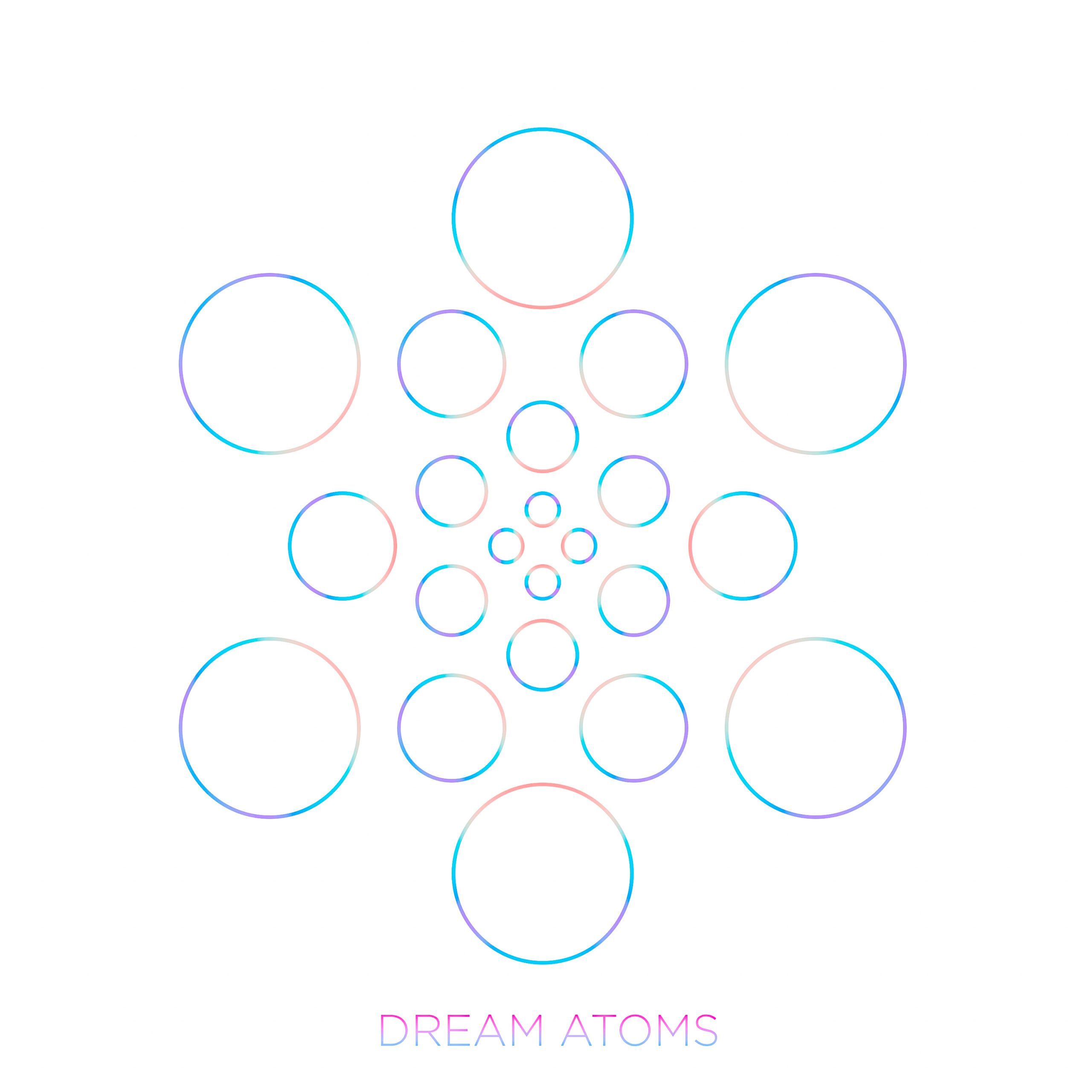 Bandcamp will be donating their revenue share of all album sales Friday, June 19th to the NAACP Legal Defense Fund. I will also be donating 100% of generated proceeds to support the fight against racial injustice.

Over the past weeks I have been watching racial prejudice take the media spotlight, many people sharing their stories, views and opinions to help shine light on this issue from various angles. It has been encouraging to watch people raise their voices in different forms to help feed the collective conscious on the matter, but I have remained silent not knowing if what I had to say would be of any value to the general public. After some soul searching I came to a conclusion my perspective and my art may be a way to use my voice to make a positive impact.

The optimist in me sees this year 2020 as a powerful catalyst for positive growth. Evil in all its outlets is necessary to redirect us to harmony. COVID-19 could be Earth’s way of telling us that our economy, that values the manufacturing of materialistic goods over the sustainability of the environment, is no longer going to work. It is my hope that the disease of racial prejudice is also eradicated, by reorganizing and rethinking systematic institutions to provide all humans with equality.

It has been enlightening, however dark and tragic, to see the various cases against other human citizens because of skin pigmentation. Given my upbringing (as a ‘white caucasian’ suburbian male), I have never experienced blatant racism against myself or witnessed against my friends of different colour – which I am grateful for. It’s easy for me to make a statement like “we are all human beings of one race, no matter the colour of our skin”, when I have never experienced systematic inequalities. The perspective this affords me is one I would like to share, as it is my belief if this truth were universally realized we wouldn’t find ourselves in this mess of racial injustice.

We are not just flesh and bones, we are the souls that temporarily inhabit these bodily temples. Gender, skin colour, nationality, religion and class do not define what we really are. Two great analogies I’ve picked up from my Yoga/Hindu studies illustrate this concept more eloquently then I could describe; ‘drops from the same Ocean’ or ‘lightbulbs sharing the same electrical Current’. If we treat each other as if we were interacting with God, we might have more respect for all conscious-sentient beings.

The composition of Dream Atoms was inspired by the writings of Sri Paramahansa Yoganada. The writing process spanned approximately a week, in stream-of-consciousness fashion. The piece is intended to be one large song with 10 movements, largely improvised in the moment which reflects some rough edges (beauty in imperfection, right?). Conceptually, the work revolves around the question, is the reality we perceive upon awakening from a dream any more real than the reality of dreaming itself? Could the limited range of our consciousness not be able to discern waking life to be a powerful dream like matrix? 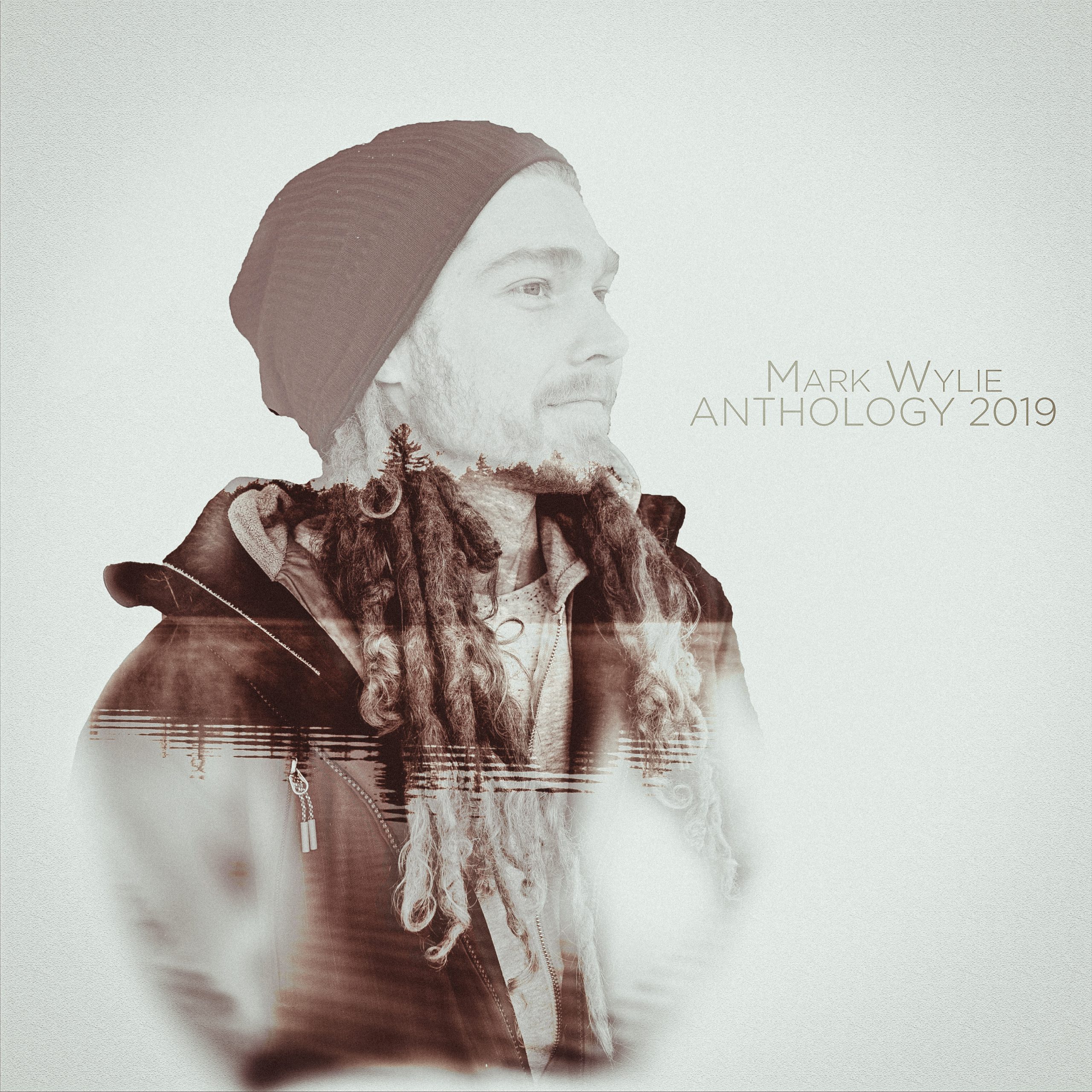 A mirror into my year through sound. A looking glass through which I channel discoveries, experiences and emotions.

I decided this year to keep the track list in alphabetically order instead of chronologically, the flow ended up working out nicely! 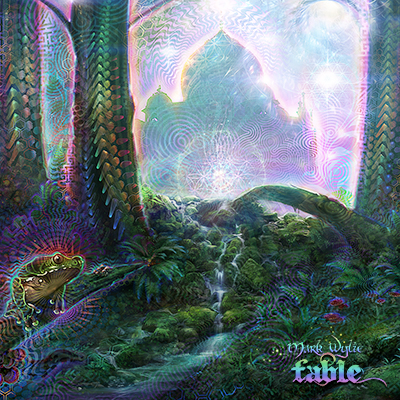 A portal was opened, from which flowed an energetic signature of origin one can’t say for certain. The emanations flowed into this being, conjuring the sonic narrative that is the Fable EP. A construct of pure imagination, this musical mythos is an expression of the physical universe and a reflection of the soul.

Fable EP is a visionary deep-dive into the psyche of guitarist & composer Mark Wylie. Following up the emotionally-charged sophomore record, Moments, the next chapter in the saga focuses on the exploration of new grounds. The writing process began at the turn of the new year, spanning merely 5 days in an intense flood of consciousness. Influenced by visionary art, Mark teamed up with artist Simon Haiduk to create album art aligned in portraying the Divine nature.

Interwoven sounds of nature and land’s heartbeat create the bedrock from which the music blooms. Ambient fractals dance in constant orbit around the cascading force of the acoustic guitar. A fabled passageway through the wilderness, destined towards a kingdom within. 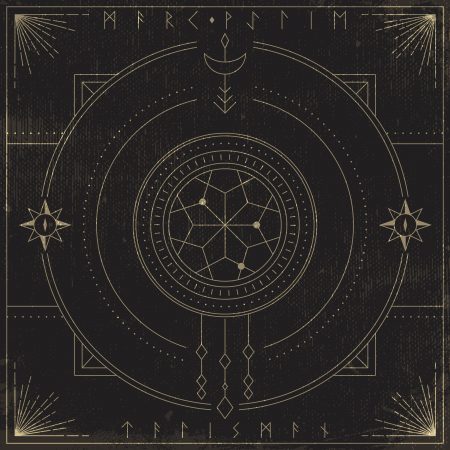 Talisman // A parable of celebration and farewell

The initial spark for this piece happened upon hearing the news that my Grandfather was in the hospital for surgery following a stroke. Writing this song was ultimately a coping mechanism, knowing soon it would be time to say goodbye. I wanted this song to take on a spirit that may help with the grieving process by bringing emotions to the surface.

There’s a balance in play between the spectrum of sadness and joy. I didn’t want this song to dwell uncomfortably in melancholy and sorrow. Instead, focusing on cherishment and celebration, reminiscing in fond memories and being grateful for all the little things.

I am thankful to have played this piece for my Grandfather on his last day.

Dedicated to my family. Written in memory of my Grandfather, John Wylie.

The sophomore album, ​Moments,​ is set to release February 13th, 2019 – on Mark’s 26th birthday. Composing for the album took place over the course of 2017 during significant personal moments that Mark encapsulated with Music. Each song with a unique emotional fingerprint, with its own story to tell.

Mark has developed an intriguing live show production for the ​Moments ​release that defies audience’s expectations when they see one man with a guitar. Taking studio magic to the stage, Mark delivers the power of a symphony as a soloist. This innovative technique redefines the boundaries of solo guitar performance. 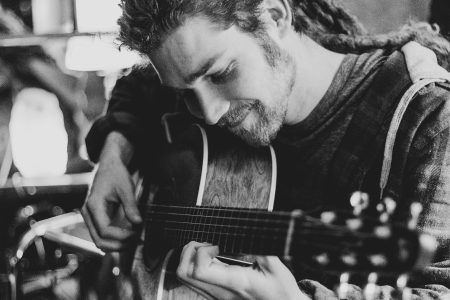 A chronology of my compositions spanning throughout the year. A cathartic expression of experiences, emotions and challenges encountered. This is my outlet for all the love, pain, hope, fear, joy and sorrow endured. These songs were a gift to me, each at a special time, and now I’m pleased to share them.

Dedicated to my family & friends.

A Summer’s Journey is an eclectic 14-minute epic inspired by my travel experiences to Australia & New Zealand with my brother Tom. I captured travel footage documenting the adventures and composed this piece as accompaniment.

A Summer’s Journey is an eclectic 14-minute epic inspired by my travel experiences to Australia & New Zealand with my brother Tom. I captured travel footage documenting the adventures and composed this piece as accompaniment.

Detour is a journey through the thoughts and emotions of composer Mark Wylie as he explores and discovers new terrain with his instrument. The album was composed and produced throughout the month of November 2016 and in many ways is a departure from previous works. Reflecting his Canadian heritage, Mark combines various cultural aesthetics that result in musical diversity from track to track. Throughout the album, Mark integrates traditional acoustic guitar playing with contemporary electronic synthesis to push the limits of what the instrument is capable of achieving sonically. All sounds you hear on the album were made with one acoustic guitar and digital production techniques.